With the recent battering taken by French wines from less-heralded areas, a spotlight’s been turned to raising the status of some appellations in the southern Rhone valley. The last ascension to cru status was Vacqueyras in 1990. There’s been talk for years of which village would be next with most bets on Cairanne. At the time of this writing the villages of Rasteau and Vinsobres were due to receive elevation from one of 16 Cotes du Rhone-Villages to possess an individual cru status. The potential confusion of its more famous Muscat Vin Doux Naturel (VDN) wines has held up the reds of Beaumes-de-Venise, but that village is expected to follow by 2005’s end. The most lauded of all, Cairanne, hasn’t yet formerly applied for elevation of its status.

Christian Honorez is a native of the Meridioniale town of Cavaillon. His Genesis Wines is a relative newcomer to the importing scene with few retail customers save Noel Young and Uncorked. Honorez’ southern Rhone sales represent around 15% of Genesis’ total. He represents Domaine Daniel & Denis Alary of Cairanne. Honorez has been on a, “21-year mission to do well for that part of the world. I love Grenache.” Denis Alary’s cuvee La Font d’Estevenas has long been a benchmark for the village.

Along with his status as one of its most recognised growers, the stoic, genial Alary is also the president of Cairanne’s syndicat. “Everybody’s been talking about ‘cru’ for a long time. Our dossier suffered a break following a terroir study defining which parcels are the most suitable. (Cairanne possesses three distinct terroirs) There’s much sentiment suggesting that, ‘if things are going well, why change it?’ We’re also being careful because of the draconian regulations of the INAO.” When pressed about the inevitability of cru elevation, Alary admitted that, “I’m convinced that Cairanne can be a cru, but I’m cautious about pushing it…the biggest problem will be with people obeying the new rules.”

Alary’s cousin Francois Alary of L’Oratoire St. Martin (imported by Lay & Wheeler and Berkmann) explained that before WW2 the lands west of the river were used for grazing animals or left for scrub and forest; the hills were planted to olive and grape. Due to the food crisis in the post-war depression, garrigue began to be planted with food crops and grapevines.

With the ensuing success of Cairanne’s wines some of the fields, though giving inferior wine, soon followed. Alary confirms that, “these problems are 20 years old. These people, while I sympathise with them, are fighting old battles.” He insists that the terroir is heterogeneous and suggests a possibility of ending differences in the establishment of a Burgundian model allowing cru and 1er cru levels, however, he concedes that this might have the effect of quashing the incentive to improve.

Englishman Nick Thompson’s Domaine de l’Ameillaud is imported by John Armit and Field, Morris & Verdin. Thompson is happy with the 2004 vintage saying that, “the fruit’s holding up nicely, with yields down 10% over 2003 and acidity up 10% with more gras.” He also gives the 2004 vintage the nod for cellaring over the 2003 which he criticises for, “having a tannic dryness that won’t dissipate with time.” Thompson believes that, “Cairanne is a mix of terroirs. I don’t want to start a local war by emphasising crus.” He freely admits that if lines are drawn that his vineyards, none of which are on the favoured coteaux, could easily be outside the borders. Simon Field MW freely shares that, “we don’t detect anything ‘Cairannesque’ about it.” His partner, Jasper Morris MW, added, “we’re not looking for something clever, just a wine for pleasure.”

One of the most difficult hurdles to overcome will be the dominant Cave de Cairanne, now being consulted to by Jean-Luc Colombo. Production of its 200 grower-members dwarves that of the 30 independent producers. Frederic Pacaut is its dynamic commercial director responsible for overseeing the cooperative’s success in outlets such as Tesco where the cuvee Coteau Brule can be found. Pacaut is justifiably proud of the cave’s Wine Sensory Tour which offers both trade and consumer alike an engaging sensorial tour of the village, and is using this to draw attention to the village’s unique terroir.

Other quality producers providing the engine that pulls the Cairanne train along include Corinne Couturier’s Rabasse Charavin (Thorman Hunt and George Barbier) who states that, “it’s too difficult to change the system because too many villagers will have to make sacrifices”, organic grower Marcel Richaud (Liberty) who believes that, “the syndicat and the cooperative are pulling in different directions”, and the Brussets. Laurent Brusset has been working for the establishment of Cairanne to cru status since 1986 as has grown tired of hearing his colleagues tell him that, “it’s too early”. He respects Daniel Alary’s work in the syndicat but is clearly disappointed that there’s been no progress for 2 years.

The lost opportunity for Cairanne is in stark contrast to that of Beaumes-de-Venise which, by most people’s estimation, is situated far less favourably. According to syndicat president Pierre Messonier who began work on his district’s cru application in 1999, “we’ve finished the dossier and are merely awaiting confirmation from the INAO.”

When the cru is enshrined into law, all whites and roses in produced here will be delimited to no more than Cotes du Rhone. When queried as to what makes his village reds worthy of cru status Messonier declared, “historic background and the collective will to do so.” 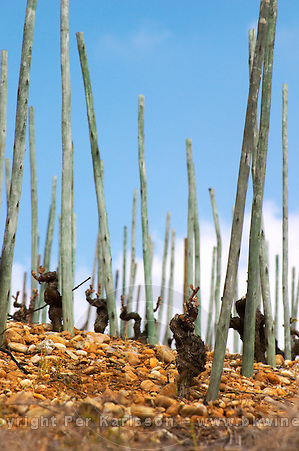 Rhone wine producers are assisted by the quasi-governmental promotional board Inter Rhone. During a break at March’s Decouvertes du Rhone its director, Emmanuel Drion, said he’s intent to spend far more in 2005 on in-store promotions than in 2004 while slashing 50% from its advertising budget.

On a recent visit to Great Britain, Drion met with 10 major agents he claims are supportive of this shift in focus. Berkmann Wine Cellars’ Belinda Stone seems nonplussed with generic promotions, sharing that, “we tend not to get involved in generic promotions…tailoring promotions to meet different criteria throughout the country and try not to simply price discount.

A promotion based upon increasing trade awareness and information about the winery (incentives to visit the winery, or winemaker dinners, for example) work best in our environment.” Genesis’ Christian Honorez added that, “sales are not affected by generic promotions. I would like an initiative like a smaller version of the ‘Decouvertes en Vallée du Rhone’.” Mentzendorff’s French Wine Controller Rod Smith differs in his opinion that the, “Think Red Think Côtes du Rhône campaign has had tremendous success in increasing consumer awareness in the UK market. Whilst this only impacts directly on a small selection of our M. Chapoutier range, we are delighted that the region gains in popularity.”

To be Cru or to be Villages

In addition to the business of cru elevation, four areas are being raised to CdR-Villages status presently being able to label their best wines basic Cotes du Rhone—Plan du Dieu, Signargues, Uchaux, and Puymeras.

Of these four, the ones best positioned to promote themselves are the Signargues cooperative and the village of Puymeras whose wines are imported by Yapp Bros. Signargues has the advantage of progressive winemakers making creative cuvees with smart, modern labelling, while the Puymeras cooperative has for years filled orders for Georges Duboeuf and in doing so has learned what succeeds in the greater marketplace.

Their plan to promote the village through strong associations with the Escoffier Society should help in the domestic market but will be lost upon export. “Though we’re pleased with this new development, we know the Rhone valley is still in a crisis, so we have to continue to work hard to be worthy of our new status,” admits cooperative director Vincent Audibert, a confession that could be applied to many of Mssr. Audibert’s contemporaries.

CIVB on the 2010 vintage in Bordeaux
On Lebanese wine

Travel to the world’s wine regions with the wine experts and the wine tour specialist.

Our much appreciated book on organic wines: Read more on all our nine prize-winning wine books!

Enter your email to get it:

Time to book a wine tour?

Travel on a wine tour with us to Bordeaux, Champagne, Douro, Tuscany, Piedmont, South Africa, Chile-Argentina, and much more...

We know more about wine — and about organising exceptional wine tours — and will give you a better, more extraordinary wine and gourmet experience.